The Pool is such an exceptional restaurant that customers may suspect there’s something wrong with them when they walk out feeling that something was missing. But they’re right. Eating there is like dating somebody who looks great, gives you presents, takes you on trips and tries to convince you that you’re happy until the day you find out that the gifts and plane tickets were charged to your credit card.

Much of this restaurant’s appeal, as well as some of its problems, come from its architecture. The Pool is one half of the old Four Seasons restaurant in Midtown, the part on the north side of the Seagram Building with a square marble pool in the center. The other end is now the Grill, which I reviewed in August. Philip Johnson designed the whole thing with richly detailed, rigorously geometric understatement that earned it status as one of the few interiors in the city protected by landmark designation.

Major Food Group, the company that runs the Grill and the Pool, took its cues from Johnson to give the two restaurant supplies contrasting styles. The Grill, with its imposing walnut paneling, has a meat-focused menu covers with midcentury roots that is overseen by Mario Carbone. The Pool, under the hand of Rich Torrisi, serves seafood with a contemporary outlook.

Crucially, Major Food Group and the building’s owner decided that each restaurant deserved its own bar with its own style. The Grill already had one. For the Pool, which didn’t, they requisitioned, redecorated, refurnished and renamed the mezzanine. 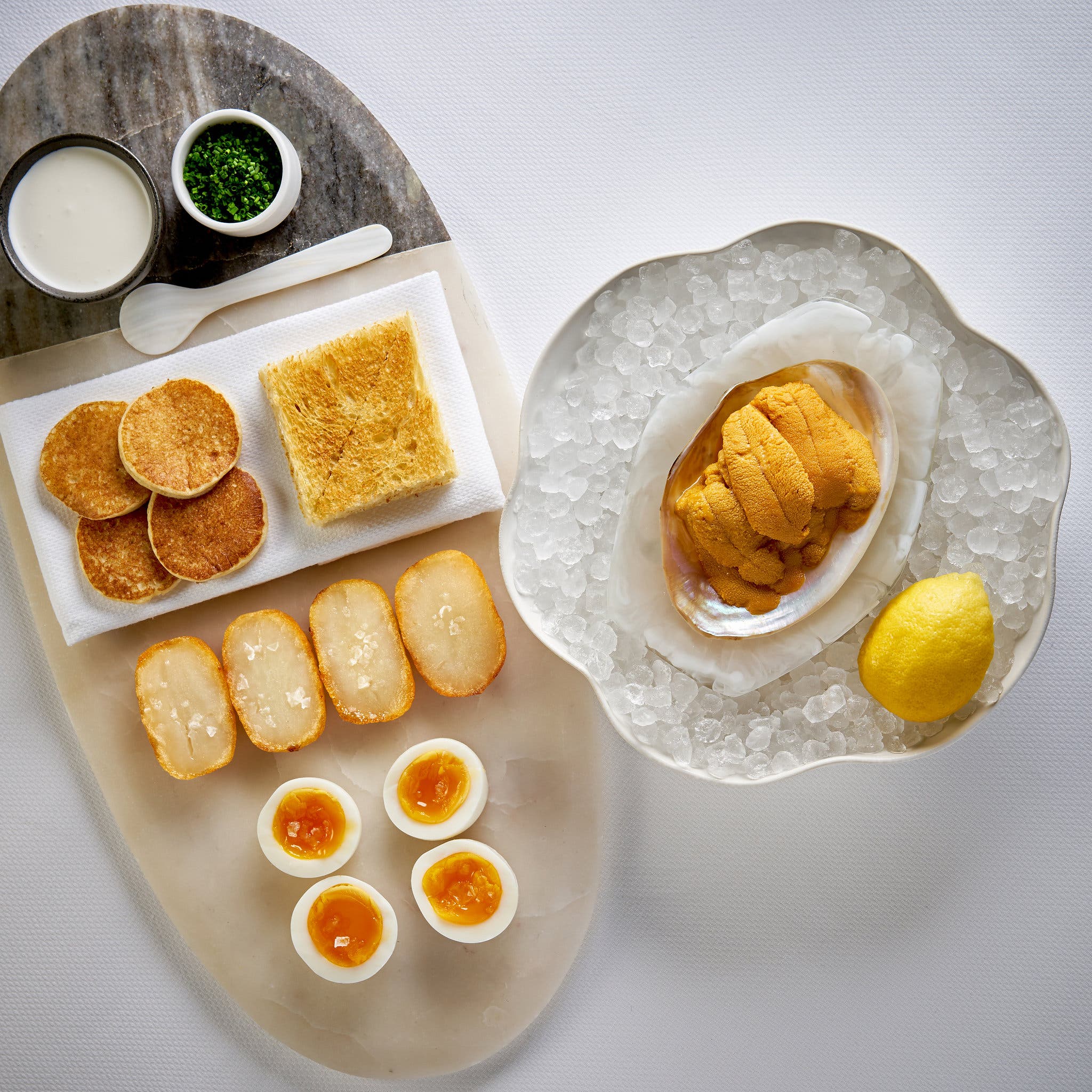 The new Pool Lounge, I discovered by making a phone call, was built without the permits from the Landmarks Preservation Commission that the law requires. In September, the commission summoned the building’s owner, RFR Holding, for a public hearing.

An application has been belatedly filed to cover three major installations made without approval: the bar and the wall coverings of woven cotton, wool and silver threads in the lounge and the reception desk in the lobby off East 52nd Street. (Sheldon Werdiger, director of marketing and design development at RFR Holding, said in a statement that because furniture is not covered in the landmark designation, “we thought a new reception desk and bar in the lounge were additive fixtures to the space that can be easily removed and did not require LPC oversight.”)

But you don’t need to be an architectural historian to see that none of them are remotely in the International Style. The large, inelegant reception desk belongs in an airport; you half expect to be asked if you’re checking any luggage. But the more serious rupture is the Pool Lounge. Although the building’s owner has argued that the Four Seasons used the mezzanine for private events and storage, it was open and in use for restaurant seating every time I ate in the old Pool Room. The tables up there, with their views of the lower dining room and the pool itself, were among the best in the house.

Now the mezzanine looks as if it had been moved on a trailer from some other building and attached with thumbtacks. Its blue color scheme and rounded, Deco-inspired furniture fight with what is left of Johnson’s right angles and natural tones. When the lounge is full, it’s a distraction. When it’s half-empty, as it often seems to be, it looms like a stage set waiting for the actors to show up. Either way, it sucks energy from the restaurant, which needs all it can get.

The Landmarks Preservation Commission is waiting for a response from the landlord before ruling on the new fixtures. One change that it is not challenging is the removal of the large planters from the four corners of the pool. When the Four Seasons opened in 1959, these held trees that were changed whenever a new spring, summer, fall or winter rolled around. The trees broke up the sight lines, so you never saw the entire space at once. Now you look around at an uninterrupted sea of heads.

Messing with the subtle dynamics that Johnson set in motion puts pressure on the cooking and the dining room staff to animate the room. They don’t completely succeed right now.

The Pool’s problems don’t include the ingredients, which are spectacular. The sweetness of chilled spot prawns under a few drops of olive oil made me shiver with pleasure. A trio of flash-seared Hokkaido sea scallop, Pacific mackerel whose skin had been peppered and griddled, and raw amberjack under tiny cells of finger lime suggested that Mr. Torrisi could run a stunning sushi restaurant.

My eyes rolled back in my head whenever I ate sea urchin. In one appetizer, it is arranged on griddled pretzel bread with mustard oil and tiny cubes of green apple. In another, lobes of it are layered into an iced bowl to be eaten, with crème fraîche and chives if you like, over blini, hard-cooked eggs, toast or, my favorites, creamy potato halves roasted in duck fat. (Caviar and trout roe are served the same way.)

Mr. Torrisi’s approach is to be lavish with punctiliously cared-for seafood and to outfit it sparingly. A beautiful illustration is the cured king salmon, two long, intensely flavorful strips served with a single potato dressed with mustard, shallots and dill. Another is any of the whole fish. The skin on turbot caught in Portugal is seared to a satisfying crackle on a plancha and served with a simple lemon vinaigrette. Like the Dover sole, it is lifted from its skeleton by a slim captain (they’re all slim) who performs the surgery wearing a Tom Ford suit. 8 Healthy Cooking Hacks Everyone Should Know Baskin-Robbins Shoots and Scores with New March Flavor of the Month, REESE’S 3-Pointer